Will Donald Trump Legalize Marijuana if He Wins 2020 Re-election? 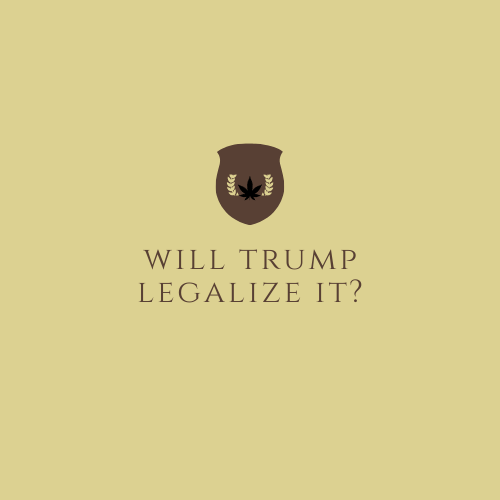 Even though millions of Americans carry a medical marijuana card, marijuana is still outlawed under federal law.

In November 2020, America votes, and there’s a good chance Donald Trump will get back into office. We cannot help but wonder whether he’ll finally legalize marijuana.

It’s the least he can do, considering that far worse substances are legal.

I mean, if tobacco and cigarettes and alcohol are allowed, yet they trigger cardiovascular disease, where’s the logic in banning a substance with proven medicinal value?

Two-thirds of the American population are in favor of legalizing marijuana, but it remains to be seen whether it will come true in Donald’s second term.

What will it be like once marijuana becomes legal?

The world will be better off, that’s for sure.

The following are some of the immediate impacts we’d observe:

With millions of cannabis enthusiasts roaming the country, many jobs are created to keep the wheels rolling.

According to Forbes, the cannabis industry is expected to be the leading job creator in the next few years.

If you have a college degree, you can look for administrative jobs in canna-businesses, but it’s far more lucrative setting up your own company e.g. a dispensary or a grow facility.

When the government criminalizes a substance, it promptly creates an underworld controlled by kingpins.

In states where marijuana is illegal, you’ll find organized criminal networks that sneak marijuana into the state.

Ganglands allow for crimes like assault, theft, and murder.

Opioid addiction has become a national crisis. Slowly and irreversibly, it eats away at the social and economic welfare.

Medical marijuana is an alternative treatment, and people can use it instead of opioids for, e.g. pain and anxiety relief.

How Will Government Support the Marijuana Industry?

If President Donald Trump wins a second term in 2020, his administration owes us the following:

Public health agencies hold cannabis as less than, and it’s not uncommon for doctors to hold negative opinions about cannabis.

And yes, people with certain illnesses are turning away from prescription and OTC drugs in favor of medical marijuana.

But then it’s not a big deal if public health departments won’t change their supremacy complex over marijuana.

From time to time, we hear about the Drugs Enforcement Administration (DEA) raiding medical marijuana businesses.

The DEA typically accuses its targets of money laundering or having ties with drug cartels and trafficking.

Unsurprisingly, none of these raids helped build a strong case against the company and instigate legal proceedings for justice.

And this is why owners of medical cannabis businesses feel as though the government harasses them.

For some strange reason, the government imposes severe restrictions on marijuana research.

The industry (and consumers) would gain far more if scientists were given free rein to work out their ideas, ya know, as it happens in other fields.

It would allow us to find out the full extent of marijuana benefits. For instance, many people are not aware that hemp and marijuana can be used to build low-cost, durable housing.

Cooperation with the banks

In this age of online transactions, businesses need banks because of payment processing. Sadly, many major banks don’t want to cooperate with marijuana businesses.

Banks have hesitation working with marijuana businesses because marijuana is federally criminalized, but the government should step in to right this wrong.

What if Donald Trump Doesn’t Win?

It’s not like the Democrats will reverse the progress already made, but they sure as hell will slow down further advancement.

The marijuana industry has the most to gain from Trump’s presidency.